ABDOMEN—Gross Anatomy of the cecum and Appendix 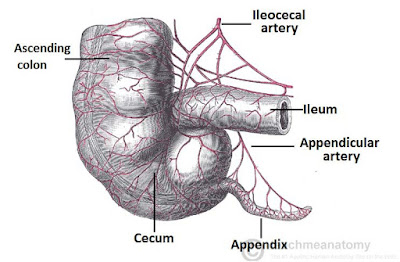 The cecum and appendix are part of the gastrointestinal tract. They are the most proximal part of the large intestine, located between the ileum (distal small bowel) and the ascending colon.
Having served as a site for cellulose digestion in our ancestors, the cecum now simply acts as a reservoir for chyme which it receives from the ileum. The appendix contains a large amount oflymphoid tissue, but has no vital functions in the human.
diagram showing cecum and appendix

The cecum is the most proximal part of the large intestine and can be found in the right iliac fossaand suprapubic region. It lies slightly inferior to the iliocaecal junction, and can be palpated in the right iliac fossa if enlarged due to faeces, gas or malignancy.
The name is derived from the Latin word ‘caecus’, meaning ‘blind’, due to its blind-end inferiorly. Superiorly, however, the open end of the cecum is continuous with the ascending colon. Unlike the ascending colon above it, the cecum is intraperitoneal.

The appendix, also known as the vermiform (worm-shaped) appendix is a narrow, blind ended tube attached to the posteromedial end of the cecum. The position of the free-end of the appendix is highly variable, and can be categorised into seven main locations. The most common positions areretrocaecal and subileal. A simple way to remember the positions is by imagining the appendix as the hour hand of a clock
RELATIONs 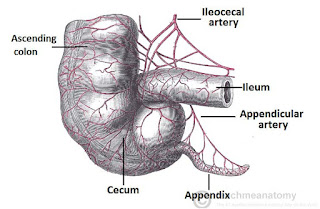 Appendicitis is acute inflammation of the appendix, and is the most common cause for acute, severe abdominal pain. The abdomen is most tender at McBurney’s point – one third of the distance from the right anterior superior iliac spine to the umbilicus. This corresponds to the location of the base of the appendix.
The aetiology depends on age. In the young, it is mostly due to an increase in lymphoid tissue size, which occludes the lumen. From 30 years old onwards, it is more likely to be blocked due to faecal matter.Initially, the appendix cannot drain, and so increases in size, stretching the visceral peritoneum. This causes a vague pain in the periumbilical region. As the appendix swells, it irritates the parietal peritoneum, and causes severe pain in the right lower quadrant.