Videos:Blood supply to the upper limb 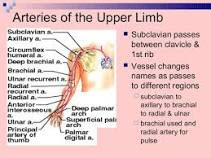 watch the videos:  https://youtu.be/OgcuTWtH4zU
The arterial supply of the upper limb is derived from the subclavian artery. The right subclavian artery originates from the brachiocephalic artery, which is the first branch of the aortic arch. The left subclavian artery originates directly from the aortic arch, being the third branch.
The subclavian artery ascends laterally to exit through the thoracic inlet, crossing posteriorly to the anterior scalene muscle. It gives off several branches for the head, neck and chest as well as scapular branches before it becomes the axillary artery at the lateral border of the first rib.
The axillary artery turns into the brachial artery just below the axilla as it passes the inferior border of teres major. In this short space between the first rib and the upper arm, it supplies blood to the shoulder, including the scapula via several smaller branches.
The brachial artery is the continuation of the main arterial supply in the upper arm as it travels medially towards the elbow. It gives off a deep branch and collateral branches that supply the arterial anastomoses at the elbow before terminating distal to the elbow and bifurcating into the radial artery and ulnar artery.
The radial and ulnar arteries extend along either side of the forearm to the wrist. Proximally, they both give rise to recurrent arteries that complete the arterial anastomoses at the elbow. In addition, the ulnar artery gives off an intraosseous branch that trifurcates to form anterior, posterior and recurrent branches.
Distally, the ulnar artery is continuous as the superficial palmar arch, and the radial artery continues as the deep palmar arch. Both give off branches that provide blood to the thumbs and fingers
watch the videos:  https://youtu.be/OgcuTWtH4zU